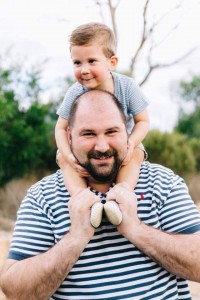 Rowan’s wife just wasn’t convinced. In fact, that May day in 2013, India was pretty sure that he was faking the pain in his stomach to avoid a social engagement later that day. But the Melbourne banker was not pretending, and within a week, the then 31 year-old had been admitted to hospital with acute appendicitis.

“Luckily, my surgeon was wary and a scan later revealed a hamburger-shaped growth in his bowel. This was rather alarming, given the surgeon said the colon should look more like a sausage!”

Rowan’s advanced stage bowel cancer came as shock – especially because, just weeks before, he had been given the all-clear by his GP after a general health check.

“I still can’t fully comprehend how that could have happened, “Rowan exclaims. “After losing my father to cancer when I was ten, I have tried to be proactive about my health and had scheduled regular check-ups from 30.”

“By the last round of chemo, my body was a mess. I couldn’t even sign my name, the nerves in my fingers were so damaged.”

The effects of chemotherapy can be harsh and in some cases, long-lasting. It is also true that some Lynch syndrome cancers respond differently to treatment compared with sporadic cancers. Indeed, Lynch cancers can remain unaffected by treatments that are effective elsewhere. It is essential for an oncology team to know whether bowel cancer is caused by a Lynch syndrome mutation before any treatment is administered. It is best practice for all colon tumours in patients under 50 years of age to be tested for Lynch syndrome however, this does not happen consistently across the Australian health system.

Luckily, in Rowan’s case, tumour samples were tested so the oncology team knew which treatment would be most effective.

Post surgery, Rowan set about piecing together his family’s health history.  As with many Lynch syndrome families, inquiry unearthed a strong pattern of cancer across the generations.

“It wasn’t just my father. My paternal grandfather had bowel cancer in his 40s and died a few years later. His sister died of bowel cancer and her family is riddled with cancer cases.”  Death certificates from earlier generations revealed evidence of young deaths suspected to be from cancer too. Had Rowan been assessed under the Bethesda criteria, devised for assessing an individuals likelihood of carrying a Lynch syndrome mutation, he and his family would most certainly have been regarded as ‘at risk’ years before he developed bowel cancer. This is frustrating for the 34 year-old Melbourne father of one who didn’t know of this history beforehand.

“With so many direct relatives, generation after generation, succumbing to cancer, I would have thought that the family would talk about this! It seemed every older generation knew a little bit of extra information, but no-one talked about it.

‘There was even a saying (I subsequently found out) that cancer was the family curse. There must be a better way to assess or record a family’s risk. Doctors should have a way to check a data base, if someone is concerned.”

Many Lynch syndrome advocates around the world agree and Lynch Syndrome Australia’s (LSA) 2015 study identified the lack of awareness of the medical professionals as the main barrier to timely diagnosis and treatment, both in Australia and overseas. Indeed, even the criteria used to assess risk presuppose that patients have a thorough knowledge of, and ready access to, their family members’ medical history. This does not allow for smaller, nuclear and disconnected families, which for many are now the norm.

With a young family of his own, Rowan is determined that nothing will deter him from protecting his children, when the time comes.

“When you are first diagnosed, it is such a shock that your immediate reaction is, ‘What have I done to my child?’ It’s natural to want to know their fate, straight away.”

Current guidelines advise that genetic testing for Lynch syndrome must be an informed choice, at a mature age and one that follows appropriate genetic counselling. And, at first sight, this seem sensible and allows the child’s rights to be protected and for personal choice to prevail, especially for a condition where cancers have, in past generations, presented from early middle age onwards.

However, the results of LSA’s study in 2015 also demonstrated that, for many family members, their first Lynch cancers are presenting decades earlier than in previous generations. This is certainly something to be considered in the future, when health and ethics authorities review the type and timing of genetic counselling and testing.

Meanwhile, Rowan’s outlook on life has altered for good.

“When I recall the worries I used to have, the priorities that governed my life, I have to laugh. Because after a Lynch syndrome diagnosis, everything is just so simple: be well, stay well. Minimise your risk and get screened. And if you haven’t started a family yet, look into pre-implantation genetic diagnosis testing, if that is of concern.”